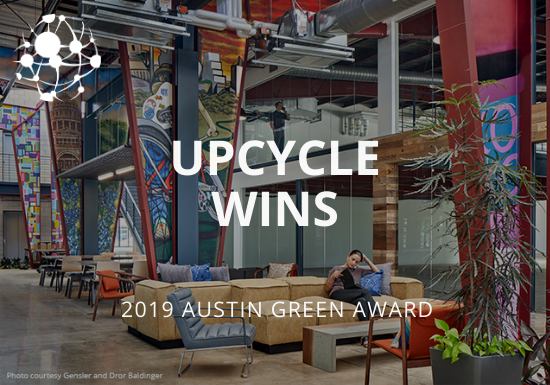 The 2019 Austin Green Award winning projects have been announced. The Austin Green Awards recognize projects in Austin, Texas that have made outstanding achievements in sustainable design and innovation. The first of its kind in Austin, these awards aim to raise the bar for future project conception and their approach to ever-changing environmental, social, and health concerns. To further serve their mission, the awards ceremony set a goal of zero-waste for the event and achieved 99% diversion from landfills through reuse, recycling, and composting.

Adaptive reuse project, UpCycle, was the recipient of a 2019 Austin Green Award. This project transformed an old industrial warehouse into bright and colorful contemporary office space, in which 95% of the existing building and materials were reused. In keeping with the theme of reuse, adding equipment to the roof was prohibited, so the Integral team developed an HVAC solution that not only excluded rooftop equipment, but also conserved ground space. Austin Managing Principal Bungane Mehlomakulu says, “Working on UpCycle was a rewarding and mission-aligned project for our team, diverting nearly all of the existing building materials from the landfill.”

Walls inside of the structure were covered with graffiti, so as a creative response to that challenge, local artists were commissioned to recreate the art, keeping the original spirit intact.

The UpCycle project is a great example of what the Austin Green Awards stand for, reframing what is possible and launching innovatively sustainable ideas for the future.

Integral Group provided the mechanical, electrical, and plumbing design services for the project.

Congratulations to Gensler, Integral Group Austin, and the entire project team for this award!