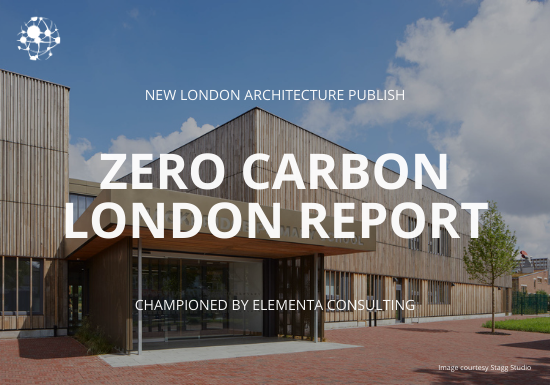 85% of over 100 companies working in the built environment sector in London believe that the current policy framework and regulations are not compatible with the UK’s zero carbon emissions says Zero Carbon London, says a report published by New London Architecture (NLA) today. It highlights that this is the biggest barrier to achieving the capital’s Net Zero targets. The report launches in the lead up to London Climate Action Week, taking place from 14-20 November 2020. Elementa is proud to be a programme champion of NLA’s Net Zero stream.

Zero Carbon London was informed by a survey of 100 companies in the built environment sector, conducted in September 2020, alongside insights provided by interviews and working group sessions with London’s built environment professionals leading on the climate agenda.

Globally, the built environment sector alone is responsible for over 40% of total carbon emissions. Following the UK Government pledge to become zero carbon by 2050, the report offers unprecedented insight into where the built environment profession is currently in the fight against climate change, and the measures that need to be prioritised in London to achieve this.

London has demonstrated great leadership by being one of the first cities in the world to set zero carbon targets, with 27 of 33 London local authorities declaring a climate emergency so far, and proliferation of initiatives and collaborations across the sector. The report showcases over 80 of the best examples of buildings, masterplans, infrastructure, and toolkits that support London’s transition to a low carbon city.

View the Projects showcase here and the Case Study showcase here. Elementa’s project Hackbridge Primary School has been selected as a case study – the UK’s first true net zero carbon school, and the first designed to the ‘PassivHaus Plus’ standard.

The report also identifies the need to minimise embodied carbon by using low-carbon materials for new builds and retrofits. The report highlights Elementa’s method of extracting data from BIM models used to create a link to an embodied carbon dataset. It can give a potential range of embodied carbon emissions per project and has already been used successfully on four projects across the world, including one in London.

However, the Zero Carbon London Report also reveals that only 34% of those surveyed believe that the capital is on track to meeting its targets of achieving net-zero carbon emissions by 2050, with this figure dropping to 22% for the UK as a whole.

In light of London’s Mayoral election to be held in 2021, 60% of those surveyed believe that the next London Mayor should commit to make London carbon neutral by 2030 and make climate action the key priority. London Mayor Sadiq Khan has said he would bring forward the zero-carbon deadline to 2030 but this would require a huge programme of investment as well as new powers, which is down to the national government.

This should be the key driver for the economic recovery from COVID-19 too. Over 90% believe that the current COVID-19 crisis could be an opportunity to transform our way of life, act in a more environmentally conscious way, and transition to a 100% green economy.

However, NLA warns that with the current inadequate provision of central government funding, access to green finance, and incentives, none of this will be achievable. The report cites this as one of the biggest barriers for London’s built environment industry to achieving the Net Zero targets, a close second to ‘policy and regulation’. Current policies are believed not to be effective to drive the changes needed to decarbonise the built environment. Among the biggest concerns are the lack of integration across different policies and differences in benchmarking which fall short in pushing the industry to do better. NLA’s recent response to the government’s Planning White Paper called for a holistic net zero carbon approach that integrates the commitments to become net-zero by 2050 with other national commitments such as the Climate Change Act.

Other challenges include a lack of common standards and shareable data, time and scale, and lack of skills and knowledge. While survey respondents believe this is at a good level among the industry, the NLA Expert Panel on Net Zero identified the lack of carbon literacy among professionals and the general public as a key barrier.

The report also provides solutions to help us get to zero carbon, with ‘retrofitting to become 90% of the work of built environment professionals’ emerging as the key approach that should be implemented in the next five years. NLA is backing Architectural Journal’s RetroFirst campaign and will be focusing on this vital agenda over the coming months.

Find out more on the NLA’s Net Zero programme which brings together built environment professionals and decision-makers to share best practise and accelerate solutions to stop climate change and create a greener, zero-carbon London. Elementa is proud to be a programme champion with principal Nathan Millar, a member of the Expert Panel for the stream.