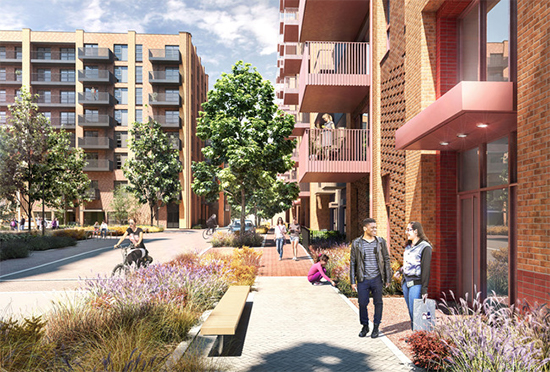 Associate Clara Bagenal George discovered, through her work in energy strategy development, that current energy policy was not representative of real life scenarios. The Greater London Authority (GLA) London Plan’s carbon factors used in design of gas and electricity systems were not keeping up with the changing state of the utility grid.  Carbon factors last published by the GLA were now significantly less reliant on coal-fired plants. With up to 25% renewable energy on the grid, the carbon footprint of electricity was getting smaller.

Electric-based heating and energy sources are better from a carbon perspective than on site combustion systems (e.g. gas boilers). With this in mind, Clara helped to found the London Energy Transformation Initiative (LETI).  LETI’s shared its findings with the GLA in an effort to work collaboratively in the research process, and Elementa Consulting advised on the development of new standards for the London Plan.

Through the work with LETI and the GLA, Elementa have developed new carbon-efficient design strategies for our clients, replacing combined heat and power (CHP) systems with air source heat pumps, and optimising system and infrastructure sizes to close the capital expenditure gap. 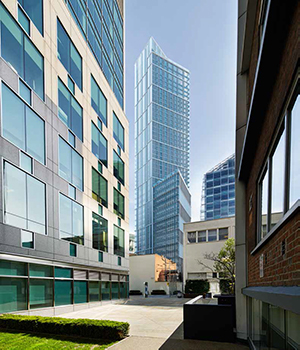 The original energy strategy for this project was based on the now superseded London Plan centred around combined heat and power (CHP) driven district energy centres. By using hybrid heating and cooling system centred around an ambient loop with an electric air source heat pump (ASHP) for hot water generation top up. This creates a symbiotic system that allows the commercial office and hotel uses to work as one, maximising the efficiencies and energy demands of the other. Key within this strategy is taking heat rejected in cooling mode and putting it into the largest energy use demand in the hotel which is the hot water. This has allowed the removal of gas focused combustion systems from the building, decreasing infrastructure and air quality issues. It also has a large carbon benefit when considering the ever increasing renewable percentage of the grid.

This was not a one step process however. When developing the project through detailed design when we first looked to make the above change we were initially asked to maintain a small CHP contribution in conjunction with the ASHP. However following scheme development and a further planning amendment which allowed the draft of the new London Plan to come into place and which as noted above we had had the opportunity to influence, this then allowed us to remove the combustion systems completely, providing a building that was on point with todays standards and had more reasonable future resilience.

It is worth noting that as the new set of Policy/Plan began to become recognised more widely, we were able to push the sustainability agenda through more readily with a very receptive planning and GLA consultation. Being confident in the operational characteristics of the building we were able to reduce water storage sizes, reduce plant sizes and developed the design with the client which completely dropped the reliance on gas throughout the building. The resulting over-all carbon savings increased from an estimated 20%, up to approximately 45%.

We picked up this project post planning, with the plan being to connect to a nearby district heat centre or if necessary build their own within the building.

The target when the original planning permission was lodged was a 35% reduction in carbon emissions. The original energy strategy, however, would have only achieved a 20% reduction, leaving a shortfall of 15% to the original target. According to the local council’s requirements, this would have then incurred a carbon offset payment, if the carbon savings could not be increased.

We entered discussions with the client to review the benefits of using heat pumps instead of gas, explaining the carbon savings in both construction and operational phases. With our engineering focused recommendation, the decision to go combustion-free was made.

The plan is to deliver energy through a centralised ambient loop air source heat pump. By going with an ambient loop rather than the more traditional higher temperature loop, it will limit circulation losses from unused energy and further reduce the amount of infrastructure needed to be installed into the building to reduce potential overheating, a significant issue in many residential developments. This in turn will reduce the buildings over-all whole life carbon emissions but more importantly user comfort and satisfaction.

The anticipated carbon reduction for this development with the new energy strategy is now greater than 45%. It now comfortably meets the current requirements to avoid the carbon offset payment and has become a model for the surrounding areas. 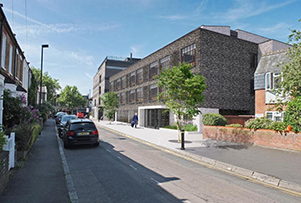 Our project room2 Chiswick, is pioneering the trend of the Hometel, which is focused on understanding people and their accommodation needs. They have taken a different approach from established hotel perceptions, not just in the unique culture of their business, but also in the sustainable way that they have approached their energy needs.

The original energy strategy consisted of CHP and gas boilers systems throughout the hotel for heating, cooling and domestic hot water. However, as this project had been on hold for several years, by the time it came back online, our knowledge and research into carbon factors and energy strategies had opened up more options for us to consider.

We did further analysis on the site in collaboration with our specialists in Canada and looked at the viability and benefits of using more sustainable techniques. It was agreed that it would be beneficial to switch to a ground source heat pump system, both for environmental and financial advantages over the long term.

A ground Source heat pump system involves around 20 bore holes below the building of about 200m deep, that circulate water through them to extract heat. This benefits from being more efficient than air source heat pumps as the temperature below ground is much more consistent. There is an initial extra expenditure for ground source energy, but it allows savings in other areas, so that over a period of 25 yrs+ costs are much reduced over other energy systems. In this instance the project was a long-term investment allowing a longer term view of the initial capital expenditure and its associated ROI.

After presenting our findings to the client they were happy to proceed with our suggestions. If we had stuck with the original energy strategy, which was based on outdated carbon factors, it is unlikely that there would have been any tangible decrease in carbon emissions. But with the new energy strategy, the client is looking at around 60% reduction in carbon emissions as well as cost savings, over the long term. Managing Director Robert Godwin says “We are delighted that Elementa could suggest this innovative technology to allow room2 to reduce the carbon footprint of our latest property in Chiswick, in line with our strategy to be a leading hotel operator to take our environmental responsibilities seriously” 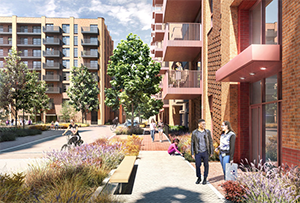 The redevelopment of the former Kodak factory site in Wealdstone into a social housing development will include 650 homes, business and employment space, as well as retail, restaurant and community facilities.

The initial low carbon plan was centred around the standard GLA policy of the time and focused around a CHP district energy scheme.

When we became involved post planning we did two things. We gathered metered data from a number of the clients other sites to determine apartment and central infrastructure loads and associated capacities. We then looked at whether a CHP lead system still offered the benefits initially assumed.

Once calculated we concluded that we could reduce the energy provision per apartment by up to one third of the recommended design standard, without effecting the comfort of the residents. This reduction in energy per apartment, not only reduced energy usage, but condensed the plant size significantly, thereby, releasing space for alternative use. It also highlighted that the peak days were very rare and that the system would operate below 50% for the majority of the time. Pumping and infrastructure were updated to provide modularity and the ability to cope with the wide swings in usage as well as being able to pump harder during the peak times through infrastructure which had been optimised for the more common lower operation use.

There was still a decision to be made about the source of energy to be used in the development. With Heat Pumps more efficient than CHP from a carbon perspective, but costs for electricity exceeding gas, balancing the socio-economic requirements of the social housing development with the sustainability aims was an important driver for the client and Elementa in this instance. The final scheme had a small CHP at the request of the planners, in conjunction of boilers (for more efficient operation during sub 5oC temperatures) and to make use of the more economic gas but the majority of the load was dealt with by the ASHP’s.