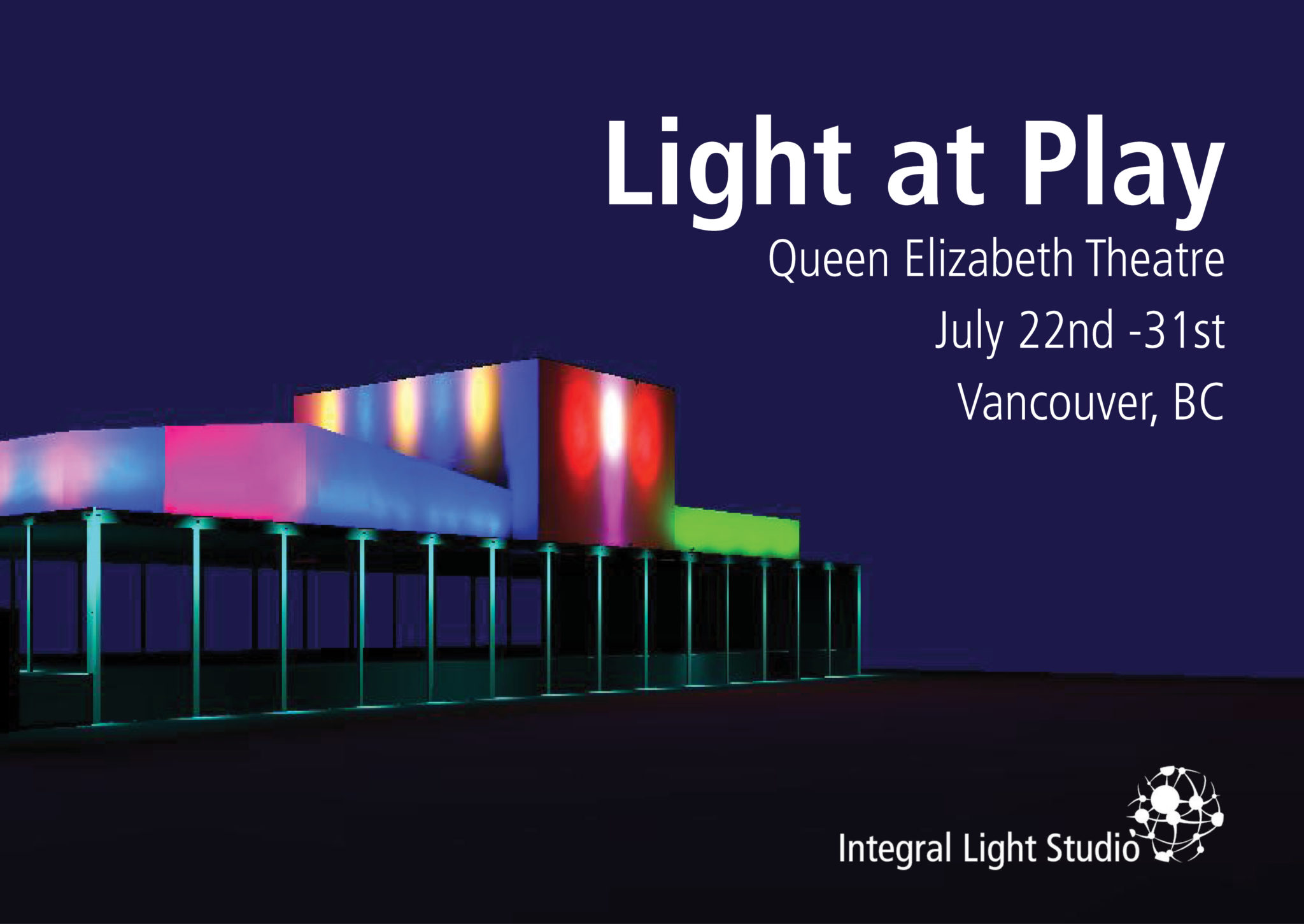 Vancouver, BC: On July 22nd, the City of Vancouver launched the Drum is Calling Festival, a 9-day event celebrating the 150th anniversary of the Canadian Confederation. Locally named Canada 150+, the celebration includes Indigenous engagement and programming as a way of honouring Canada’s heritage beyond the last 150 years and embodies a shared future with mutual understanding.

Integral Light Studio in collaboration with Kasian, and with combined support from CDm2 Lightworks, Lumenpulse and Western Pacific Enterprises have teamed up to create “Light at Play”, a dynamic light show which is responsive to an original composition that will close the event every night.

Light at Play uses the exterior of the Queen Elizabeth Theatre as a canvas that serves as a closing homage occurring every night after the daily festivities. To set the scene – image the faint twilight after dusk, with darkness and summer heat weighing down the crowd after a long day celebrating Canada’s history and culture, when suddenly; life. The heritage façade of Queen Elizabeth theatre is illuminated with 100 dancing lights, while traditional Aboriginal drums lead the way with a marching rhythm, choreographed to synchronize with the original composition “Pow Wow Carnival ft. Little Creek Singers” by DJ Shub. Hearing and sight, audio and visuals, music and light –combine to create a one-of-a-kind, unforgettable experience.

Associate Ellie Niakan led the design and explains her “goal with the light show was to create a memorable, uniting presentation. She continues, “Light inspires us, raises emotions we didn’t know were there – it’s mesmerizing.”

Coordinating with First Nation Powwow-Step creator DJ Shub, the nighttime event will be beautiful gathering including young and old. Combining traditional aboriginal music with a modern electronic twist, DJ Shub’s stirring rhythms will be accompanied with Ellie’s striking visuals. Those lucky enough to see the presentation will be privy to a masterful display of mutual excellence.

“Music brings people together. People of all backgrounds can enjoy it, and the same goes for lighting. Together they speak to everyone,” described Ellie. “We really succeeded in replicating what I believe is one of the most important core values of our country – its ability to unite people from all cultures.”

The path to completion was not always a smooth ride however. According to Ellie, the teams faced many obstacles in their race to complete the project in a miniscule amount of time.

“Aside from our narrow time frame, we were faced with the challenge of finding luminaire donors for the show.” said Ellie. “Our plan required a significant amount of resources, which proved to be quite a challenge to gather.”

Three generous companies stepped forward and provided the Luminaires, control and installation for the presentation – Lumenpulse, CDm2 Lightworks and Western Pacific Enterprises. The design itself was done on an existing building – Queen Elizabeth Theatre – bringing many challenges of its own. As a heritage site it couldn’t be altered in any way, forcing Ellie and the team to work around its existing conditions.

Specializing in outdoor and urban lighting design, Ellie Niakan brings her passion and excellence to this celebration of Canada. Molding together traditional Aboriginal colour pallets with modern show design, she creates a moving, breathing dynamic light and sound experience in the heart of downtown Vancouver. Make sure to stop by between July 22nd and 31st to enjoy the festivities and catch the dazzling light show at the end of every day!