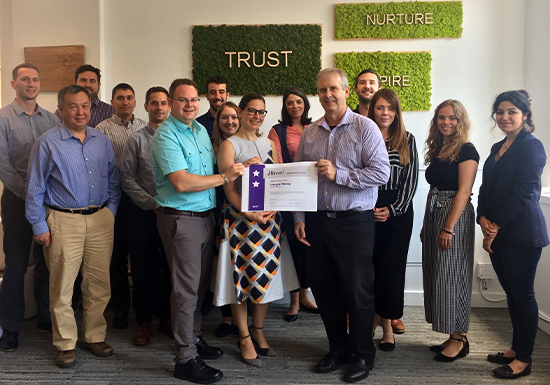 Toronto, ON: We are proud to announce our Integral Group Toronto office is the first space in Canada to become Fitwel Certified, a recognition of Integral Group’s commitment to green engineering and healthy workspaces. Fitwel has awarded our Toronto office a 2-Star Certification through the Center for Active Design for our efforts to optimize building occupant health and productivity through targeted improvements. Earlier this year, our London, UK office became the first Fitwel Certified office in Europe.

Fitwel is an evidence-based third-party rating system for buildings developed and tested by experts in public health and design over a five year process. Utilizing point-based scorecard, the organization judges buildings by addressing a broad range of health and wellness behaviors impacting workplace design and operational policies. Integral Group Toronto recently moved to 380 Wellington St W, a two-story, dual-tenanted building and wanted to go beyond typical sustainability features to provide a healthy environment for their team. The office is close to the downtown core, providing staff with many transit options and creating a welcoming work area for the growing group of MEP engineers and sustainability consultants.

To achieve the certification requirements, the Integral Group team implemented features which focus on enhancing the staff’s health and well-being through the built environment. The team was led by Toronto Managing Principal, Mike Godawa and Integral Group Sustainability Advisor, Aaron Wouters, who was also the first Fitwel Ambassador in Canada.  As a whole, Integral Group supports the principles of Fitwel and became Fitwel Champions earlier this year with Fitwel Ambassadors in each region allowing us to be early adopters of this rating system.

“We sought Fitwel certification for the Toronto office to recognize the many improvements we were planning for our office to benefit the well-being of the staff. Fitwel is a unique rating system that highlights several elements that positively influence our staff’s health, wellness and productivity. Its evidence-based approach is quickly becoming the gold standard in bench-marking the well-being of building occupants and we wanted to incorporate it into our renovations,” explains Wouters.

Achieving Fitwel certification required planning and foresight by the Integral Fitwel Team in order to supplement their existing measures. As the office is centered between two city parks, staff are encouraged to enjoy time outdoors, and employees fitness is supported through monthly yoga workshops. Healthy additions to the office included installing ERVs, high induction diffusers, bike racks, active workstations, occupancy sensors and LED lighting which is dimmable, plus low-flow plumbing fixtures. Daylight harvesting through View Dynamic Glass also provides unparalleled natural lighting, which has proven to have a measurable effect on morale.

All these improvements transformed the original space into a high performance and healthy office, perfect for Integral’s environmentally motivated employees. The well being focused changes Aaron Wouters and his team made have created better lit, more comfortable, and healthier areas for Integral employees. A transformed space that foster greater interaction and collaboration; the office has become a hive of productivity and healthy living. Integral Group is proud to be an industry leader in adopting this progressive certification, and promoting employee health and well-being.

About Fitwel: Fitwel is a cost-effective, high impact building certification system that optimizes building occupant health and productivity through targeted improvements to workplace design and operational policies. Fitwel has a vision for a healthier future where every building is enhanced to support the well-being of its occupants and surrounding communities. Fitwel’s development was led by the U.S. Centers for Disease Control and Prevention and the General Services Administration. The Center for Active Design is the operator of Fitwel, leading its widespread adoption and future development.