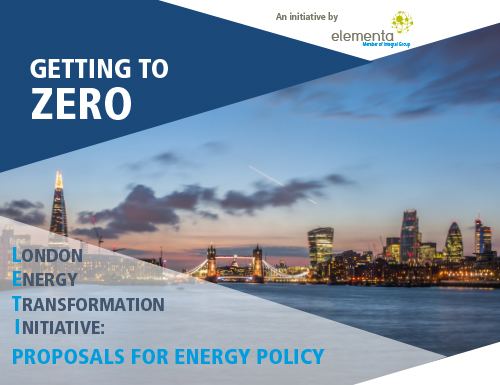 September 26, 2017 (LONDON, UK): While it is understood that progress takes time, what happens when the issue being faced – climate change – isn’t slowing down? It is within this framework that the London Energy Transformation Initiative (LETI), has been operating since their inception. In just 6 months, LETI has hosted public workshops, established peer collaborative task forces, and is on the cusp of presenting four energy policy proposals to the Mayor of London’s office.

While LETI will be key to implementing policy changes to help London become a Zero Carbon capital, it will not be possible without wider support of the construction industry. Over 20 plus organisations have already pledged their support and more continue to sign up daily.

A new report outlining the four energy policy reports was released at the “Getting To Zero: Launch of the LETI Proposals” event. The recommendations presented at The Building Centre were reviewed by the LETI taskforce, to create a cohesive set of energy policy proposals to present to the GLA. The four reports revolved around four key priorities established at the initial LETI workshop and include energy use disclosure, better performance metrics, decarbonising energy and heating and delivery mechanisms. (A Short summary of each proposal is detailed at the end of this article).

Elementa’s CEO, Kevin Hydes, commented “Today marks the beginning of the future. This report gives clear directions, simple actions and lays out a roadmap to a Net Zero future for London. I for one am excited about how London will use these concise proposals and embed them into upcoming plans to maximise its potential. The event at the Building Centre this evening is significant, we are urging our fellow professionals to strengthen this movement and put their name behind it. But it doesn’t stop there. Tonight will kick start a chain reaction of momentum. London has the opportunity to lead once again, we must do all we can to ensure it will succeed.”

LETI is hoping to capture a wider public following in order to gain the traction needed to ultimately include its recommendations into the London Plan and the London Environment Strategy. LETI has also established a new website as a central platform to keep supporters and interested parties informed of the progress to date.
To that end, LETI are gathering signatories on behalf of individuals and organisations, and urge you to:

1. Add your personal signature today.
2. Convince 10 Londoners (peers, colleagues, friends and family) to add their signature.
3. Create a task force in your place of work and convince as many in your company to sign up – and then request that your company throw its brand behind these recommendations and sign up as an organisation supporter.

Those interested in participating or learning more are encouraged to visit www.leti.london.

ABOUT LETI
The London Energy Transformation Initiative (LETI) is a network of over 150 built environment professionals that are working together to put London on the path to a zero carbon future. The voluntary group is made up of developers, engineers, housing associations, architects, planners, academics, sustainability professionals, contractors and facilities managers, with support and input provided by the GLA and London boroughs. Elementa Consulting have initiated and coordinated LETI as they were frustrated that the current energy policy in London wasn’t driving design solutions that encouraged long term carbon emissions reduction. LETI was established to work collaboratively to put together evidence-based recommendations for two pieces of policy – the new London Environment Strategy and the rewrite of the London Plan.

LETI acknowledges that global temperature rise needs to be kept below 1.5 degrees to avoid catastrophic climate change. To achieve this, all new buildings must operate at Net Zero Carbon by 2030 and existing buildings by 2050. As a global city, London has a responsibility to help lead the transition to a low carbon future.

LETI believes that current energy policy relating to carbon emissions in buildings in London will not deliver Net Zero Carbon for new buildings by 2030 and therefore recommends the following proposals be implemented in policy to get London on the right trajectory. These proposals will help in the delivery of buildings that are more energy efficient, lower carbon and less expensive to occupy.

SUMMARY OF EACH PROPOSAL
LETI Proposal 1- Revise the London Plan Energy Strategy Targets
The current planning targets, based on using Building Regulations Part L compliance tools and percentage carbon emissions improvements over a notional building, encourage a culture of false reporting and thus do not lead to best practice design and performance. It is proposed that the London Plan energy strategy shall introduce a kWh/m2 site energy use target, as well as introducing a fabric energy efficiency target, onsite renewable energy generation and a peak demand reduction method statement.
LETI Proposal 2- Heat Networks
The priority must be to ensure that policy drives decision-making that delivers long term carbon emission reductions in a way that gives the designers flexibility to incorporate engineering strategies that are appropriate to the building use. Resilience should be encouraged with systems that are technology neutral and can adapt to future technologies and building uses. All heat networks and communal heating systems should be required to provide a strategic district energy local plan that includes a Zero Carbon transition plan. All new developments should follow the ‘delivering low carbon heat’ hierarchy that prioritises the use of energy sharing networks to reduce load and energy storage (batteries and thermal stores) to reduce peak demand.

LETI Proposal 3- Offset payments
The current carbon offset policy does not deliver zero carbon buildings. The Mayor should provide guidance for the boroughs on the implementation of the carbon offset policy and require annual reporting relating to offset funds by London boroughs. The offset payment calculation methodology should be updated to include total building energy use, regulated and unregulated energy with staged payments to the boroughs. The cost of a tonne of carbon should be set at a level that incentivises on-site carbon emission reduction and reviewed regularly.

LETI Proposal 4- Energy Use Disclosure
Disclosure of building energy use is a central component underpinning progress in reducing carbon emissions and running costs. It is proposed that a new ‘Be Seen’ stage of the energy hierarchy be introduced such that all new buildings disclosed their energy use annually in kWh/m2, broken down by building type in the development, fuel type and by regulated and unregulated use. Energy consumption would be displayed transparently on an online platform along with the predicted energy performance from the energy assessment. This platform can be used to show how developments and buildings are performing. The power to mandate the use of Display Energy Certificates (DECS) for all buildings should be devolved to the Mayor so that energy use disclosure in existing buildings can be mandated, in the meantime it should be incentivised.

Development of proposals
The LETI energy policy proposals have been developed over the last 6 months. In May 2017, over 100 built environment professionals came together in a workshop facilitated by Elementa Consulting. During the workshop participants worked at 10 tables, each tackling a different theme. Four priorities emerged; data disclosure, better performance metrics, decarbonising heating & energy and delivery mechanisms. A working group was established around each priority that established a set of recommendations for energy policy. These recommendations were merged together by the LETI taskforce who have published a set of proposals for energy policy.
For more information and updates see the LETI website www.LETI.London