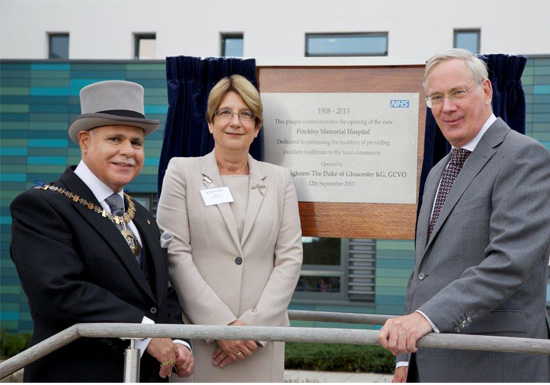 The award-winning Finchley Memorial Hospital has been officially opened by His Royal Highness the Duke of Gloucester, following a £28 million rebuild.

The hospital was completed in October 2012 and opened to patients earlier this year. It includes a 12-bed infusion suite, which is one of the first community chemotherapy services in London.

Services provided at the new Finchley Memorial Hospital include a walk-in centre, community pharmacy, outpatients department with a range of diagnostic and therapy services, podiatry, audiology, infusion services and cardiology.

Elementa’s work included the design of all mechanical, electrical and public health services and sustainability engineering design at the site. A BREEAM ‘excellent’ rating has been achieved and the client brief is a 25 year life span.

The building, which was named Best Designed Project at the International Partnership Awards in May, also incorporates a number of sustainability measures including rainwater harvesting and solar panels.

The rebuild took great care to respect the building’s history as a war memorial hospital, and the grounds include a memorial garden, which will provide a peaceful place for patients and visitors to sit and reflect.